To mark its tenth year in 2016 the Extreme Sailing Series™ introduced a new weapon of choice, the hydro-foiling GC32 catamaran. Smaller, faster than the Extreme 40, and considerably more challenging for the crew, this cutting edge design gave the Series’ signature Stadium Racing format a complete revamp.

Designed by foil expert Dr Martin Fischer, the GC32 is part of a revolution that has gripped the sport ever since huge AC72 catamarans flew around San Francisco Bay in 2013.

The magic of this ultra-light, responsive hydro-foiling catamaran lies in its unique J-foils which work much like an airplane wing to lift the hulls out of the water, reducing drag and rapidly increasing speed. This makes for a magnificent spectacle for the crowds watching on shore and a physical balancing act for the crews who have to work hard trimming the sails to keep their boat in the air.

The GC32 is capable of reaching speeds of up to 39 knots, in comparison to its predecessor which peaked at 30. If you want an idea of what that feels like, it is like putting your head out of the window in a car when it is raining at 45mph (72kph).

To find out more about the GC32 read - From the Drawing Board: Dr Martin Fischer on the design of the GC32 rocketship 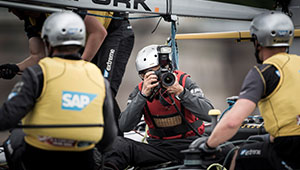 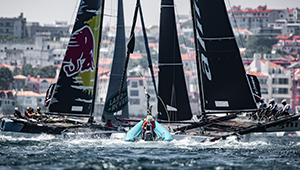 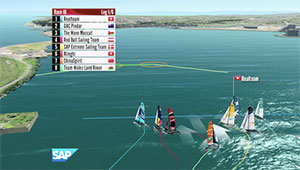