With eyes on the prize, the Swiss sailed a superb day on the water on the penultimate day of the 2018 Extreme Sailing Series™ season finale in Los Cabos, climbing one position from their unsafe third place finish on Friday, to a more favourable second place today (Saturday).

Alinghi took the top spot in both of the day’s two races, knocking Austrian-flagged Red Bull Sailing Team down a podium place to third. The teams are now tied on points, snapping at the heels of frontrunners Oman Air.

“It felt pretty good out there today,” said a pleased Arnaud Psarofaghis, co-skipper and helm for Alinghi. “Winning every race of the day is always a good thing! We’re hoping for a steadier breeze tomorrow so we can really make an impact.”

For Danish-flagged SAP Extreme Sailing Team, it would seem the wheels have come off. Another day of inconsistency saw them finish day three in fourth, watching helplessly as rival crew Alinghi gained momentum in their quest for the Act and Series titles.

“I feel like I’m the unluckiest guy on the race track at the moment,” admitted a disheartened Adam Minoprio, helm for the Danish squad. “There is still tomorrow. Hopefully we get good breeze so we can have some good races and sail the boats like they are meant to be sailed.”

It wasn’t just a tough day for the Danes though. Race Director John Craig had the difficult job of navigating extremely tricky, shifty breeze. The wind took no notice of his planned 14:00 start time, causing delays until 16:23 when the conditions finally became sailable.

“It started off really light and shifty today, which made it difficult to set the course,” Craig explained. “The offshore breeze finally won over in the end. During our reach practice and speed trial runs in front of the Breathless Hotel and Médano Beach, the breeze actually worked its way down into the central bay and we were able to get some racing started. Unfortunately, we were only able to get two in, but it’s better than what it was looking like earlier in the day.”

Unable to start a race until well into the afternoon, the crews had to push themselves to keep their heads in the game; a lack of wind being just as challenging for the sailors as full pelt racing. Team Oman Air had no problems with this though, and were able to maintain their advantage over the fleet by two points – their sterling sailing making them the only crew with a score sheet of podiums in every single race of the Los Cabos competition so far.

“It was a bit of a nasty little day out there today, waiting for the wind to fill in,” chuckled skipper Phil Robertson. “Luckily we got in a couple of quick short burners. Two thirds for us which we certainly can’t complain about in this fleet.”

Despite the lack of wind, newcomers US Team Extreme are still more than enjoying sailing around Mexico’s waters.

“The weather is beautiful here!”, skipper Taylor Canfield exclaimed. “We’re getting used to all the manoeuvres with a new team which has been a big challenge for us, but we are showing some moments where we are putting some great stuff together.”

The final day of racing gets underway from 13:30 local time (UTC-7) tomorrow, when the winner of the entire 2018 Series will be decided. With the Los Cabos Act valid for double points and the last race also valid for double points, the teams at the top can’t let the ball drop as they push through the final races of the year.

Racing will be streamed live on Facebook, YouTube and on the Extreme Sailing Series App, powered by Spark Compass and VOGO Sport, which is available to download through the App Store and Google Play. 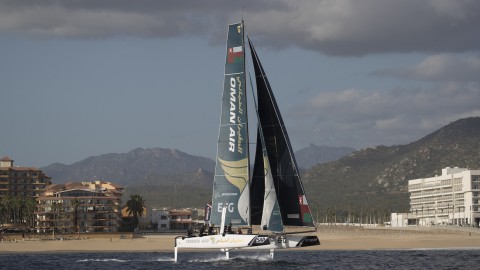